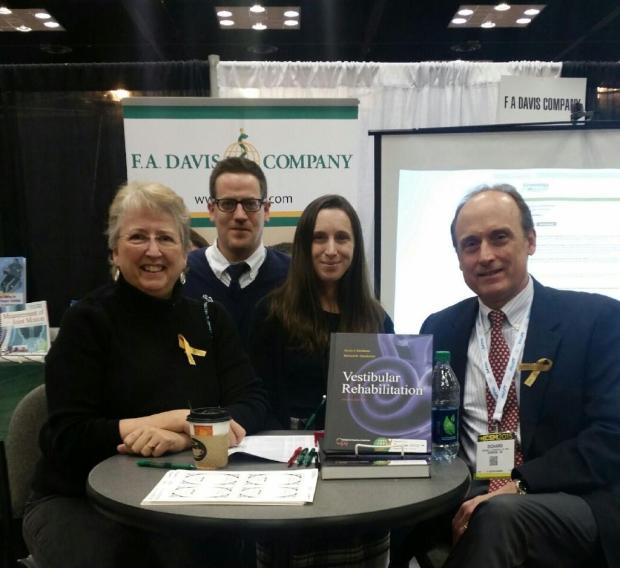 Last week was the biggest annual conference F.A. Davis attends every year, APTA’s Combined Sections meeting. Six of us flew from Philadelphia to Indianapolis to display our latest resources, chat with instructors and students, and catch up with the many PT authors that write for Davis. This is always a fantastic meeting for us, as Physical Therapy is our biggest market in Health Professions.

This year, we had many new products to talk about in the booth. In August 2015, Kinesiology in Action, an online product for – you guessed it – kinesiology, will be released, so we wanted to show screen shots on a projector to instructors that stopped by the booth. Several new titles are coming out soon, like Chris Wise’s Orthopaedic Manual Physical Therapy, and Stephen Carp’s Peripheral Nerve Injury, so we had some sample materials for instructors to look at. We’ve also recently published books, like Vestibular Rehabilitation, and were lucky enough to have the authors, Susan Herdman and Richard Clendaniel, stop by the booth for a book signing (pictured).

One of the more fun things we do every year is have a contest at the APTA Student Conclave in June. At last October’s Conclave, we gave the grand prize winner the option of a free flight to CSM, or the equivalent value in a gift card. This year’s winner, Shelby Wagoner, stopped by the booth to say “hi” (she opted for the gift card since she drove to CSM).

Luckily, Indianapolis has some great restaurants, and each night we had a spectacular meal:

Wednesday: Bluebeard. Amazing place that has a new menu every day, as they use local meat and produce. The beer and cocktail list is outstanding too.

Thursday: Oceanaire Seafood Room. Everything we had here was perfect, including what look like a 30 pound piece of chocolate cake for dessert.

Unfortunately, working at conventions doesn’t leave much room for sightseeing at each of the cities we travel to, but we still had a great time with our favorite PTs and another excellent conference.